Raid on the Catacombs

Curse of the Muertos Moon

The Curse of the Muertos Moon, is a curse that Jolly Roger has created to turn every Pirate into one of his minions. The curse was first used on All Hallows Eve, or Halloween as we know it today.

"As we all know, All Hallows' Eve is a powerful day. It's a day the dead are said to rise and visit with the kin they left behind. Only this year, a terrible thing happens on that very day - a full moon - and Jolly Roger be working to summon all his magic to curse the Caribbean for his gain. Every night when the moon be at its fullest - anyone who walks on land that be touched by moonlight be "cursed" - and become undead! Them that's caught in the fray will be forced to attack towns ... and each other! Chaos will overtake me beloved islands and Jolly Roger's joy will be full as cursed Pirates fight for his unholy cause! At least, that's what the Mermaids done whispered - properly warned about the curse ye be. When will this terrific mayhem befall the Caribbean? As the curse tells, starting October 31 - but how long will it last? That mystery is still to be unraveled... So take care mate, if yer indoors the curse won't touch ye. Why? The scuttle be that Captain Jack got wind of Jolly's plan and took somethin' he needed to make the curse complete. Ole' Jack stole an ancient Aztec relic called - The Moonstone - from one of Jolly Roger's henchman. Now his curse can be broken and only affects those on land, not at sea - so there is hope. Once the moon wanes, everyone indoors must come out and defend the towns against the undead! For if ye defeat an undead Pirate, it be a favor, it is. He lands in jail and returns to his natural state after a bit. And if enough cursed Pirates be defeated, we'll have saved the Caribbean from Jolly's curse. So do yer duty, watch yer back ... and pray for clouds."
―Unknown Pirate[src] 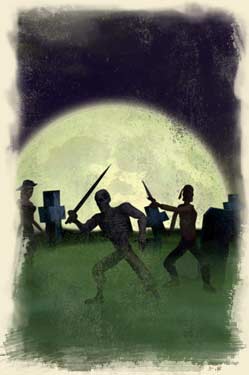 Retrieved from "https://pirates.fandom.com/wiki/Curse_of_the_Muertos_Moon?oldid=136671"
Community content is available under CC-BY-SA unless otherwise noted.