"The East India Trading Company has need of your services."
―Cutler Beckett to William Turner[src]

The East India Trading Company, otherwise referred to as the East India Company or abbreviated as EITC, was a British joint-stock company and megacorporation formed for pursuing and monopolizing trade with the Indian subcontinent and East Indies, and later expanded to China and the Caribbean. The East India Company traded mainly in cotton, silk, indigo dye, salt, saltpetre, tea and opium. The Company was granted a Royal Charter by Queen Elizabeth I on December 31, 1600. Shares of the Company were owned by wealthy merchants and aristocrats. The government owned no shares and had only indirect control. The Company eventually came to rule large areas of India with its own private armies (including Indian sepoys and British soldiers), exercising military power and assuming administrative functions.

"Had a brush with the East India Trading Company, did we, pirate?"
―Commodore James Norrington to Jack Sparrow[src]

The English East India Trading Company was established by British explorers who discovered the exotic riches of the East Indies, particularly India, during their initial voyages to the region. With trading voyages sponsored by English merchants hoping to profit from gold, silver, ivory, silk and spices, the company grew in size and power. It began to expand into the Caribbean when the attention of the company's leaders turned to the area's rich plantations. This expansion was led by it's Governor/Chairman Lord Cutler Beckett. The company ultimately expanded so much that any threat posed to it was a threat to Great Britain itself.[1]

Piracy was one of the biggest problems for the Company. In the late 1720s, several EITC ships was sent to join Admiral Lawrence Norrington's Royal Navy fleet and participate in his hunt for Edward Teague, Keeper of the Code and one of the most notorious pirates on the Seven Seas. Though Norrington managed to capture Teague for a brief time, his mission miserably failed.[2]

The company was based in London, led by a single Governor and a Court of Directors. Through one of its employees, Cutler Beckett, it was known to have condoned the transport of slaves from Africa to the Caribbean. However, Jack Sparrow, captain of the Wicked Wench, refused to carry out this sinful task, and Beckett had his ship torched and Sparrow himself branded a pirate.[3]

"I serve the Company, whatever they need me to do."
―Benedict Huntington to Marcella Magliore[src]

Around the beginning of the Quest for the Shadow Gold, Benedict Huntington, the Company's manager for Hong Kong, attempted to eradicate piracy in the East Indies, attacking the hideouts of Chinese pirates led by Mistress Ching and Sao Feng. When he failed, he used the havoc created on the Seven Seas by the Shadow Lord, to attack all Pirate Lords of the Brethren Court. In his quest, he followed Jack Sparrow, the Pirate Lord of the Caribbean, from the Pacific to the Atlantic. Though he had some success, in the end, Huntington's quest was a failure.

At some point before the Attack on Port Royal,[4] the Company sent a fleet of ships to the Bahamas to participate in one of the many conflicts in that area.[5]

"What is the East India Trading Company doing in the Caribbean?"
"Well, we are East of India. Just the long way around. After all, when goods do not cross borders, then armies will.
"
―Will Turner and Lord Cutler Beckett[src] (deleted scene)

Meanwhile, Cutler Beckett remained a loyal member of the company, attaining the title of Lord and rising to the position of Governor.[6] He relocated to Port Royal, with great ambitions for the company's future. He intended not only to eradicate piracy on the Seven Seas, but also to monopolize them completely by assuming control of Davy Jones and the Flying Dutchman. He wielded more executive power than Governor Weatherby Swann, forcing him to cooperate by sending favorable reports of Beckett's actions back to England.[7] During this time, the British government was careful to protect the Company's ships, and supplied marines and vessels of the British Royal Navy as guards and escorts in case of pirate attacks.[1]

The company also tightened its control over maritime commerce in the Caribbean by imposing heavy fees and tariffs on other merchants and businessmen. This made it increasingly difficult to conduct business for those not affiliated with the company.[8] This stranglehold on Caribbean shipping drove honest sailors and merchant captains like Captain Bellamy to make port in lawless places like Tortuga, beyond the company's reach.[9]

"We need prisoners to interrogate. Which works best when they are alive."
"I am exterminating pirates, as commanded by the Company.
"
―Cutler Beckett and Davy Jones[src]

Around this time, it was revealed that the Company was doing much more than that. It made deals with other forces in the Caribbean, such as the infamous Jolly Roger. The alliance was to eradicate piracy. As the Company prepared for attack, many of the settled islands of the Caribbean (Port Royal, Tortuga, Padres Del Fuego) were mysteriously destroyed by explosions. The Port Royal explosion was a result of a careless planting of gunpowder (same for Padres del Fuego, as well), while the Tortuga explosions were an open war against Piracy. The Battle of Padres occurred, and the EITC implemented their force with Jolly Roger's magic, and allowed him to begin his Invasions against the three islands. The alliance ultimately broke with the discovery of Spanish Conquistador El Patron's lost weapons, after the Battle of Raven's Cove. [10]

After James Norrington brought Beckett the Heart of Davy Jones, the Company gained control of the Flying Dutchman. Now with the most powerful ship in the Caribbean under their control, the Company launched the War Against Piracy. With the Flying Dutchman backed up by an armada of three hundred ships, the Company destroyed many pirate vessels and became the greatest power in the Caribbean. The Company, having forced Governor Swann of Port Royal into service, were able to perform mass hangings on pirates and suspected pirates without challenge.[7]

Fall of the Company's Power[]

In spite of the previous events, the Company still thrived and operated across the East Indies over the following years, although the Company's power over the Caribbean was no more. By 1750, some EITC members who survived the War Against Piracy, like Theodore Groves, were recruited by His Majesty King George II of Great Britain to search along the privateer Hector Barbossa the fabled Fountain of Youth.[12]

The East India Trading Company utilized a well-known trademark which it stamped, stenciled and painted on all cargo loaded aboard transports. The design featured the Company's initials separated by triple crosses, making the overall design resemble an anchor, and also featured on the flags of the Company's merchant and warships. It served as both a guarantee of quality and to ward off thieves and pirates.[1] Objects bearing this logo reached as far afield as the cannibal island of Pelegosto.[7]

The Company also maintained a coat of arms: a gold-on-maroon design featuring waving English pennants and sea lions supporting a shield of ships and roses. The Company's Latin motto was displayed beneath. This symbolized the Company's scope and grand goals.[1] 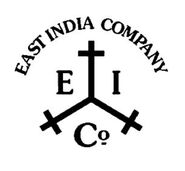 "I have trained all the Company agents impeccably. They can spot a pirate on sight."
―Benedict Huntington to Barbara Huntington[src]

"I do want you to remember, Jack, that the EITC has more ships than the British Royal Navy."
―Cutler Beckett to Jack Sparrow[src]

The Pirates of the Caribbean wiki has a collection of images and media related to East India Trading Company.