Fantasmic! is a nighttime show at Disneyland Park at the Disneyland Resort, Disney's Hollywood Studios at Walt Disney World Resort, and Tokyo DisneySea at Tokyo Disneyland. It features fireworks, characters, live actors, water effects, pyrotechnics, lasers, music, audio-animatronics, searchlights, decorated boat floats, and mist screen projections. The narrative of Fantasmic!—although there are differences between the three versions—centers on a voyage through Mickey Mouse's imagination that culminates in a battle against the Disney Villains.

Fantasmic! transpires on the waters of the Rivers of America at Disneyland and on a stage across the waterway on Tom Sawyer Island.

The show begins with a faint musical note that swells into a lush fanfare, revealing Mickey Mouse onstage. Two light towers come out from the ground where Mickey is transported into his dream. He dances and orchestrates various water fountain, pyrotechnic, projection, laser and lighting effects to the show's theme. Mist screens rise from the water, acting as projection surfaces for the animated "Sorcerer's Apprentice" sequence from Fantasia. The scene's falling stars bloom into flowers, and Mickey appears on the mist screens, standing in front of the sunset from The Lion King. The show then transitions into a jungle scene from The Jungle Book, featuring a 100-foot-long (30 m) puppet of Kaa and three floating barges carrying King Louie and black-lit monkeys (that are also seen in the Tokyo version) across the river stage. The song transitions into "Hakuna Matata". The music then segues into a dubstep rendition of "Pink Elephants on Parade" from Dumbo, as animated pink elephants appear onscreen and in the form of performers on the island. The scene then transitions to "Friend Like Me" from Aladdin. Sorcerer Mickey watches the Genie perform tricks. Then they go under the sea as they head into the world of The Little Mermaid and Finding Nemo. A bubble floats by and Jiminy Cricket appears onscreen, searching underwater for Pinocchio. An animated Monstro appears suddenly, accompanied by a heavy musical score as he crashes through water. The sea morphs into the "Sorcerer's Apprentice" flood scene. As Mickey looks around in the dark and asks "What's going on?", a ship caught in a storm appears. Captain Barbossa then appears on the mist screens.

A cannon is fired from Sailing Ship Columbia, portraying the Black Pearl from the Pirates of the Caribbean films. Jack Sparrow, Elizabeth Swann, and other pirates participate in a stunt sequence. The scene ends with fountains that look like explosions and a cannon fired from the Sailing Ship Columbia. As the scene concludes, Mickey paints the moon, with silhouettes of Peter Pan and the Darlings flying over it. Mickey's sorcerer hat is painted on the mist screen and the hat turns to clouds as Aladdin and Jasmine are on a physical magic carpet flying through the clouds while a rendition of "A Whole New World" plays. Then the carpet fades away and three small barges arrive carrying Belle and the Beast, Ariel and Prince Eric, and Rapunzel and Flynn Rider, with the accompanying signature melody from each film—"Beauty and the Beast," "Part of Your World," and "I See the Light". 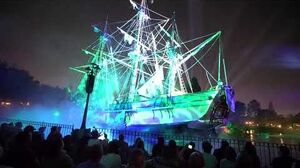 Mickey Mouse faces off against Maleficent in her dragon form in the previous version of the show. The music takes on an ominous tone as Mickey's dream takes a turn for the worse. The magic mirror appears onscreen in animated form. The mirror tempts Mickey to enter the darker realms of his imagination, "where powers far greater than yours may awaken". When asked if he has the courage, Mickey accepts the challenge, and the mirror traps Mickey inside its dark depths. The Evil Queen, disguised as the old hag, calls all the villains to partake in Mickey's nightmare, invoking a riled Ursula (from The Little Mermaid), who ecstatically joins the Queen's plot to destroy Mickey. Ursula calls upon Chernabog (from Fantasia), who summons deceased spirits. He then summons Maleficent (from Sleeping Beauty), who threatens Sorcerer Mickey as she transforms herself into an enormous dragon. Onstage, the 45-foot dragon sets the waters ablaze, breathing fire onto the river. Mickey faces the dragon, claiming that he is in control of his imagination, and defeats the dragon, destroying the villains in the process.

Tinker Bell then appears. Magical stars sparkle on the island as the Mark Twain Riverboat approaches. Pyrotechnics ignite from the Mark Twain as all of Tom Sawyer's Island is lit up in rainbow colors, revealing black and white Mickey in Steamboat Willie attire. The Mark Twain glides past the audience carrying several dozen Disney characters, and a celebratory atmosphere prevails. With another flash, Mickey appears atop the highest point of the tavern as the Sorcerer's Apprentice and he conducts a final series of water, fireworks, laser and light orchestrations. Mickey disappears and reappears onstage in his tuxedo from the beginning of the show, bidding the audience farewell before disappearing once again in a bright blast of fireworks.