Edit
watch 02:07
Spider-Man: No Way Home Trailer Dropped - The Loop
Do you like this video?
Play Sound 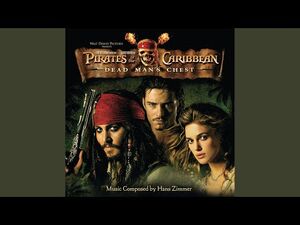 Jack Sparrow is a theme composed by Hans Zimmer as the character theme for Jack Sparrow in Pirates of the Caribbean: Dead Man's Chest. The theme is the first track on the film's soundtrack.

The suite arrangement begins as an off-kilter waltzing cello solo (used to represent Jack's drunken demeanor - sometimes referred to as the "Jack Walk") , supported by double basses. The segment is then repeated more adventurously with the addition of a French horn, and a staccato viola line, before culminating in a reprisal of small theme representing Jack's silly moments first heard at the end of The Medallion Calls.

The track then flows into a cello theme based on the light-hearted jig from Fog Bound (which forms the basis for the majority of the track) before building into a more bombastic, adventurous piece. A cello ensemble, french horns and trombones are prominently heard as the main new thematic identity gets a full statement. The lively bombast is intercut with cello-heavy segments as the track progresses through a series of action-heavy phrases.

At the four minute mark, the music begins to build into a new action theme for Jack, often referred to as "The Jack Action Theme". It begins at four minutes with ascending viola and violin triplets, before exploding into a powerful trombone heavy action theme, with violin and viola playing a fast-paced staccato line and double-bass and cello doubling the main trombone theme. The melody is given a second grander statement, with trumpet, wagner tuba and choir adding further power to the track.

The theme concludes with another off-kilter cello solo, before building into a final bombastic action theme.

Elements of the theme are heavily used throughout the four sequel films, and throughout other tracks in their respective soundtracks.

Jack's new theme is first heard near the beginning of the film after Jack escapes the Turkish prison and retrieves the drawing of the key to the Dead Man's Chest. It can be heard at the end of "I've Got My Eye On You" on the film's soundtrack.

The most noticeable use of the new theme in the film occurs during the action sequences on Isla Cruces. Parts of Jack's new waltzing cello theme along with some of the bombastic action material from the middle of the suite and two statements of the Jack action theme can be heard in the Wheel of Fortune track.

A faster-tempo, and more percussive version of the action theme forms part of the Dead Man's Chest version of He's a Pirate, heard during the end credits.

Jack's theme is almost the same in At World's End, but there are some new instruments you can hear on the film's complete score. For example, in the theme "Cuttlefish", you hear some stingy noise from a clavier. You can also hear it in the Lord Cutler Beckett theme. At some actions points like the escape from the HMS Endeavour, you hear the faster-tempo action theme.

You hear the theme from the beginning of the film when you see the Old Bailey in London. A mix of the theme is heard in the official track "Guilty Of Being Innocent Of Being Jack Sparrow".

The action theme comes back when Jack Sparrow escapes St. James' Palace and the track can be heard on the film's complete score. Also the "drunk" theme of Jack Sparrow (called 'Is That It') is on the score.