LEGO Pirates was first released in 1989 and became a huge sensation among pirate-loving LEGO fans. It released over twenty sets in its eight year run, and fans were disappointed when the theme was discontinued. In 2010, it was revealed that a LEGO Pirates of the Caribbean theme would replace both the 2009 re-release of LEGO Pirates and LEGO Prince of Persia. A month later, it was also revealed that a video game of the same name would be released a month after the sets.

4191 The Captain’s Cabin – GBP £10.49 (US $11.99) & nbsp In the dead of night, Captain Jack Sparrow sneaks into the captain’s cabin to steal a coveted ship-in-a-bottle. As he turns to leave, two pirates jump out of the shadows. With nowhere to run, will he be able to fend them off and escape with the loot?

4192 Fountain of Youth - GBP £21.99 (US $19.99) Barbossa, Blackbeard and Jack Sparrow are battling it out for the fabled spring that gives the gift of eternal life. As they clash cutlasses, can Captain Jack tiptoe past them and make it to the fountain first?

4193 The London Escape – GBP £49.99 (US $49.99) & nbsp Captain Jack Sparrow and Joshamee Gibbs escape the hangman’s noose only to be captured again by King George’s soldiers. Can Jack escape through the busy streets of London and find refuge at the Captain’s Daughter?

4194 Whitecap Bay - GBP £71.99 (US $79.99) & nbsp At White Cap Bay, Captain Jack Sparrow and the other pirates must capture a mermaid. Spot them using the searchlight and shoot the net from the boathouse cannon. But beware! If the whale oil tips over the whole lighthouse is sure to go up in flames!

4183 The Mill - GBP £40.99 (US $39.99) & nbsp At the mill, Captain Jack Sparrow, Will Turner and Admiral Norrington duel it out for the key to the Dead Man’s Chest. Suddenly the mill wheel shakes loose with them inside! Can they manage to stay upright and still stop Flying Dutchman Pirate Hadras from scuttling away with the prize?

Ruuuun! Captain Jack Sparrow and Will Turner have escaped from the cannibal village and are being chased by their hungry foes. Can they reach the safety of the Black Pearl before their guests really do have them for dinner? Set includes roasting spit, bone cage, chief’s chair and cannibal hut.

4181 Isla De la Muerta - GBP £21.99 (US $19.99) Pirate Lord Hector Barbossa needs to capture the descendent of Bootstrap Bill to rid himself of the curse of the Black Pearl, and he believes it to be the beautiful Elizabeth Swann. As Barbossa turns into a skeleton, can Captain Jack Sparrow defeat the Pirate Lord and gain control of the Black Pearl?

4195 Queen Anne’s Revenge - GBP102.99 (US $119.99) From the captain’s quarters perched high on his magnificent ship, Blackbeard secretly looks on as Captain Jack Sparrow and the motley crew attempt mutiny against Angelica and the zombies. Will our heroes be able to take control of the ship before Blackbeard reveals himself?

A second wave consisting of only one LEGO set has come out in November of 2011. 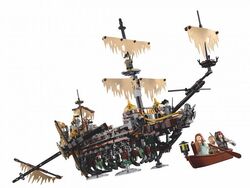 The third wave is based on Pirates of the Caribbean: Dead Men Tell No Tales was released to be in 2017.

Discover the secrets of the Silent Mary! Bring the magic of Disney’s Pirates of the Caribbean to your home with this impressive replica of the Silent Mary ghost ship. This highly detailed LEGO® model with over 2,200 pieces features a hinged bow section, opening skeleton hull with decay and destruction detailing, movable rudder, collapsible main mast and two further masts, long bowsprit with crow’s nest and mast, tattered sails, detailed quarterdeck, plus a rowboat with two oars and an array of weapons and accessory elements. This model provides a rewarding build and play experience, and the integrated stand makes it suitable for display in the home or office. Also includes eight minifigures: Captain Jack Sparrow, Henry, Carina, Lieutenant Lesaro, Captain Salazar, Officer Magda, Officer Santos and the Silent Mary Masthead.

Currently, four promotion sets are known to exist; each were released during 2011.

It was released as a promotion with The Sun newspaper on May 16 2011 in the U.K. and Ireland. It was also included inside the Pirates of the Carribean: On Stranger Tides DVD/Blu-Ray 4-Pack in the US that is sold exclusively at Target.

It was included as a promotional set in the News of the World newspaper on Sunday May 15 2011 in the U.K. and Ireland. The set includes Jack Sparrow with a bottle, sword and a raft.

It was given free to those who pre-ordered LEGO Pirates of the Caribbean: The Video Game and comprises of a minifigure of Jack Sparrow as the voodoo doll that Angelica carries.

It came with early copies of LEGO Pirates of the Caribbean: The Video Game.

A video game has been released along with the sets and Pirates of the Caribbean: On Stranger Tides. It will include events from all four movies and was released on May 12th.

Retrieved from "https://pirates.fandom.com/wiki/LEGO_Pirates_of_the_Caribbean?oldid=179371"
Community content is available under CC-BY-SA unless otherwise noted.