Edit
watch 01:55
Cobra Kai Season 4 - The Loop
Do you like this video?
Play Sound

"Adjust course, Lieutenant."
"Sir?"
"We can only hope to reach our destination before they run out of bodies."
―Cutler Beckett to Greitzer[src]

Lieutenant, sometimes pronouced as Leftenant, was a rank held by officers in the British Royal Navy, French Royal Navy, Spanish Royal Navy and East India Trading Company. The word was derived from French; the lieu meaning "place" as in a position; and tenant meaning "holding" as in "holding a position"; thus a "Lieutenant" is an individual who holds a position in the absence of his or her superior.

Originally, the only two officer ranks in the navy were Lieutenant and Captain. However, the most junior Lieutenant was in charge of the ship's ensign, or national flag. Thereafter, Ensign became the name of the lowest officer rank. Consequently, the officer second in rank to the ship's Captain was the commander of the ship's boarding party, and the rank Commander followed.

James Norrington held the position of Lieutenant during Weatherby Swann's crossing to the Caribbean from England. Shortly thereafter, he was promoted to the rank of Captain, and, ultimately, Commodore. Other notable Lieutenants included John Scarfield, Gillette, Theodore Groves and Greitzer.

Lieutenants held many other positions on ships. Many were surgeons, quartermasters, and gun deck commanders. The position of "first mate", formerly referred to as First Officer, was always reserved for the most senior Lieutenant onboard the ship, the Lieutenant Commander. He was second-in-command of the vessel and was first in line to serve as Acting Captain during the Captain's absence.

An Acting Lieutenant was usually a Midshipman who was temperarilly promoted to that particular rank in order to command a prize ship captured from pirates or enemies. They reverted back to Midshipman following the assignment. 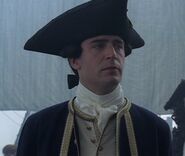 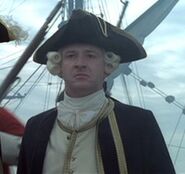