During Hector Barbossa's time as a privateer of King George's court, Theodore Groves served as a Lieutenant Commander aboard the HMS Providence during the quest for the Fountain of Youth. 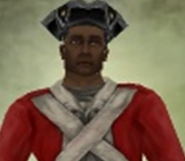 Lawrence Arnot
Add a photo to this gallery

Retrieved from "https://pirates.fandom.com/wiki/Lieutenant_Commander?oldid=175670"
Community content is available under CC-BY-SA unless otherwise noted.