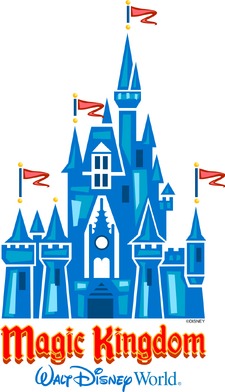 "Walt Disney World is a tribute to the philosophy and life of Walter Elias Disney...and to the talents, the dedication, and the loyalty of the entire Disney organization that made Walt Disney's dream come true. May Walt Disney World bring Joy and Inspiration and New Knowledge to all who come to this happy place...a Magic Kingdom where the young at heart of all ages can laugh and play and learn - together."
―Roy Disney[src]

Magic Kingdom Park, also known as the Magic Kingdom, is the first of four theme parks built at the Walt Disney World Resort in Bay Lake, Florida. First opening with the resort in dedication to Walt Disney, the Magic Kingdom park captures the enchantment of fairy tales with exciting entertainment, classic attractions, beloved Disney Characters and so much more.

The layout of the Magic Kingdom is that of the central hub, Cinderella Castle, surrounded by seven "lands" that are based around different themes; Main Street U.S.A, Adventureland, Frontierland, Fantasyland, Mickey's Toontown Fair, Tommorrowland and Liberty Square. Each land is home to different characters who do their best to show guests a good time.

As the first of the four theme parks to open at Walt Disney World Resort, the Magic Kingdom park captures the enchantment of fairy tales with exciting entertainment, classic attractions, beloved Disney Characters and so much more.

The Magic Kingdom's layout and attractions are similar to Disneyland Park, and is dedicated to fairy tales and Disney characters. Adventureland, Tomorrowland, Frontierland, Fantasyland, Mickey's Toontown and Main Street U.S.A. are all present. Some of the attractions are unique to one park, but most of the popular attractions are found at both parks. New Orleans Square was replaced with Liberty Square. Originally imagined as an expansion of Main Street U.S.A., the area is based on a town in colonial New England.

Pirates of the Caribbean is located in the Adventureland area of the Magic Kingdom, though is slightly different from the original from Disneyland. After the ride, Tortuga Tavern is the place to eat. Besides actual attractions, there are related activities for the children to take part in. Kids can learn to be a pirate at Captain Jack Sparrow's Pirate Tutorial. Also, the park periodically hosts Disney's Pirate and Princess Party.

At the Magic Kingdom, the Pirates of the Caribbean journey begins at the end of the Adventureland area where a skeleton pirate sits in a crow's nest attached to a ship's mast. He guards the stately Spanish fortress El Castillo - Torre del Sol. Pass under his black sail and pirate flag to the cool, covered, cavernous queue quarters. If ye be seekin' adventure, climb aboard a boat.

Pirates of the Caribbean Attraction - Pirates of the Caribbean, a classic attraction in the Magic Kingdom Park that appeals to big kids, teens, and adults, features a 14-foot drop over a waterfall into pirate caves. The boat then floats through a town where pirates are pillaging and Captain Jack Sparrow is hiding. Keep an eye out for an appearance by Captain Hector Barbossa as well.[1]

The Pirates League - Transform yerself, matey, into a true buccaneer! Captain Jack Sparrow is looking for pirates of all ages to join the crew of the Black Pearl. Come to The Pirates League and get yerself a whole new identity -- complete with name, look, and pirate portrait! Join the crew -- it's a pirate's life for you![2]

Tortuga Tavern - Come to this Mexican restaurant for fast taco salads and burritos.[3]

Retrieved from "https://pirates.fandom.com/wiki/Magic_Kingdom?oldid=176007"
Community content is available under CC-BY-SA unless otherwise noted.