Edit
watch 01:40
Boba Fett Returns - The Loop
Do you like this video?
Play Sound

Pirates of the Caribbean (ride)

Pirates of the Caribbean (ride)
Puerto Dorado was a Spanish seaport town under the administration of Magistrate Carlos. It was the main port of Isla Tesoro.

In the 18th century, Puerto Dorado was under the administration of Magistrate Carlos. Puerto Dorado served as the main port where many of the inhabitants of Isla Tesoro presumably lived, where it would at some point be assaulted by a large group of pirates responsible for numerous criminal activities.[1]

Led by a pirate captain of the Wicked Wench, the pirates attacked the Spanish fort Castillo del Morro before they began ransacking the town. A group of pirates tortured the town's magistrate Carlos, by dunking in the well. They also interrogated the magistrate for information regarding the location of the town's hidden treasury. Carlos' wife would witness Carlos being dunked repeatedly during the interrogation. The Auctioneer led an auction of "brides" at the Mercado.[1]

The pirate attack got more frantic and the mayhem became more dangerous as the town was set ablaze. Meanwhile, the pirates became too drunk to care, as they sing A Pirate's Life for Me blissfully as they went about their looting of the village. A group of prisoners at the jail within the Spanish fort try to escape by bribing a prison dog for the keys as the pirates continued to burn up the city.[1]

This Spanish fort was located on the edge of Puerto Dorado on Isla Tesoro. The fortress, manned by Spanish soldiers, was situated near the house of Magistrate Carlos and overlooked the sea. It also had a prison, where a number of pirates were imprisoned and tried to retrieve the keys to their cells from the prison dog.[1]

Located within the town of Puerto Dorado was the canteen La Cantina and the Mercado. This area became a center of operations for the Auctioneer and his assistants, who mounted numerous signs around the building reading "Take a Wench for a Bride". Having taken women hostage, the Auctioneer attempted to sell them as "brides".[1] 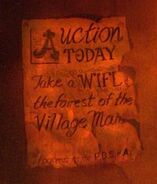 A poster pasted by auctioneers.