Sea of Thieves: A Pirate's Life

Edit
watch 01:40
Boba Fett Returns - The Loop
Do you like this video?
Play Sound

Sea of Thieves: A Pirate's Life is a Pirates of the Caribbean-themed expansion of Sea of Thieves, an action-adventure free-roaming pirate video game developed by Rare and published by Microsoft Studios for Windows 10 and Xbox One. 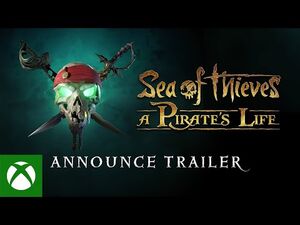 The story sees players rescuing and recruiting Captain Jack Sparrow to aide in protecting the Sea of Thieves from Davy Jones, Captain of the Flying Dutchman. Along the way, players will encounter familiar locations and faces from Pirates of the Caribbean such as Isla Tesoro, and Joshamee Gibbs, the longtime comrade and First Mate of Captain Jack Sparrow.

Besides Davy Jones, new enemy types are being introduced through A Pirate's Life and into the overall world of the Sea of Thieves: the swarming Sirens, darting Phantoms, and brutish Ocean Crawlers.