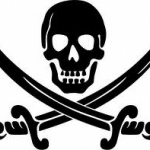 *PLEASE NOTE: This user used to go by The Sailor*

Hello, I'm Captain Dashing. I'm a big fan in POTC and I know many things about the franchise although I wouldn't consider myself an expert. I like pirate literature and lore. Feel free to talk to me about any pirate book for I bet I read it.

My main goal is to discuss any interesting queries that come my way. My friends and I are always coming up with neat (perhaps dorky) ideas about POTC and it's characters and story. I would love to have many disscusions with anyone of you.

The History of Captain DashingEdit

A Brief Historie Of the Illustious Captain Dashing and his Marvelous Exploits, Adventures, Triumphs etc.

Dawson "Dashing" was born in Bristol and raised as a orphan, living on the streets. He soon discovered he could sneak upon ship and stowaway to different ports of call all over the world.

The Honorable Scourage of Tortuga

Destruction of the Edinburgh Trader

Mutiny on the Queen Anne's Revenge

Skirmish off of Palm Tree Grove

Battle of the Fountain of Youth

One day Dawson watched a fearsome battle off the coast of Spain. He shivered as he heard the screams as one of the ships, French built by the look at it, as it sank beneath the dark waves. The next day, Dawson went to the investigate the wreckage at the beach. Underneath a broken figure, he was surprised to find a body. He was even more surprise to find him living. After rescuing him, the man said he was Captain Chevalle, a Pirate Lord of the Mediterranean Sea.

Chevalle adopted the boy and enlisted him in his never ending rivarly with Villanueva, Pirate Lord of the Adriatic Sea. The boy learned how to fence, shoot, sail as well as a great sense of style and flare by his captain, Chevalle.

At the age of twenty, Dawson parted ways with Chevalle and hopped aboard the Edinburgh Trader to find new riches in the Caribbean. The ship made a brief stop in Port Royal. There, Dawson was briefly imprisoned for public drunkness. While in the prison, he saw the Governor of Port Royal. The charming Dawson was able to gain the governor's trust. The governor confided in Dawson that he wished to rid the Caribbean from the horrible East India Trading Company. Dawson and the govenor struck an accord, saying that Dawson who try to rally the people of the Caribbean against the vile Company if the Governor realsed him.

Dawson returned to the Edinburgh Trader as they sailed off. Aboard the merchant vessel again, he was shocked to find the governor's daughter hiding in the cargo hold. Dawson agreed to help hide the girl and even gave her some off his clothes to blend in with the crew.

The ship soon docked in Tortuga. Once there, Dawson and the girl joined an epic bar fight in the pirate tavern, The Faithful Bride. The excitment of Tortuga made Dawson promise himself he would one day return. Afterwards, Dawson said his goodbyes to the girl and went back to the Trader.

Once out in open sea, Dawson spotted a man adrift in a long boat. Dawson and the crew reeled him in. Dawson didn't catch his name but took his paranoia as a bad omen. Within the hour, the ship was reefed. As the crew looked down into the brine, huge, hideous tentacles emerged and grabbed the crewman, pulling them to the depths. Dawson dived into the sea, away from the beast, hanged on the a piece of driftwood and floated in the sea for days.

Dawson almost gave up hope until he saw the white sails of the Troubadour. The captain introduced himself as Edward Teague and offered him a position as a sea cook. Thinking anything was better than drowning at sea, Dawson accepted the lowly postion.

The ship arrived at Shipwreck Cove. Dawson was amazed to see the amazing pirate city and even more amazed to see his old friend and commrade, Chevalle as well as the girl he meet aboard the Trader. Dawson witnessed the Brethren Court and readied himself for battle against the East India Trading Company.

Dawson stared on the foredeck of the Troubadour, itchng for battle. When he asked when the Pirate Armada was about the set out, Teague mysteriously replied, "Let Jackie figure this one out."

Enraged at the pirate's cowardice, Dawson set out on his own. Armed with his sabre, pistol and a rowboat filled with explosives, Dawson treaded over the tension filled waters. Luckily, the East India Company fleet was transfixed with two ships battling within a gigantic maelstrom. Dawson went behind the fleet, stopped between the two largest ships and ignited the explosives as jumped away. The two ship were then engulfed in fire and the powder magizine exploded, torching all the near by ships. As the fire spread across the aramada, Dawson swam back to Shipwreck Cove.

After the battle, Dawson jumped aboard a ship to Tortuga. He spent the next few years setting up a successful rum-running buisness, delivering rum from everywhere to Hong Kong to Bombay. He caused trouble for many other jealous pirates including Jocard, Ching and a even crossed swords with his mentor's arch-foe, Eduardo Villanueva.

He then sent out to find his own ship to captain. Dawson and his mates enlisted on a merchant ship and planned to mutiny once out on open sea. Yet, that night they were about to mutiny, a huge dark ship appeared and fired upon the merchant ship. The crew was killed within the blast save Dawson and a young Philip Swift...

Retrieved from "https://pirates.fandom.com/wiki/User:Captain_Dashing?oldid=133119"
Community content is available under CC-BY-SA unless otherwise noted.