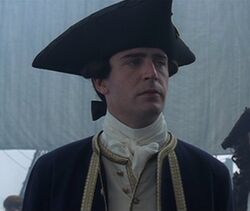 Loyal service to England has brought James Norrington respect and status. First seen serving as Lieutenant aboard the HMS Dauntless, Norrington chased and captured some of the Caribbean's most fearsome pirates, which gives him promotion from Captain to Commodore of the Fleet. That's where we meet the character at the beginning of Pirates of the Caribbean franchise. I could go on, but I don't think I can top the history that was written in the Bring Me That Horizon: The Making of Pirates of the Caribbean book by Michael Singer... 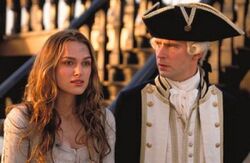 It's debatable as to which character in the Pirates of the Caribbean films goes through the greatest story arc, but James Norrington would give anyone a good run for their money. From the stiff-upper-lip British naval officer courting Elizabeth Swann in the first film, to the pathetic, ass-over-teakettle drunk re-introduced in a raucous Tortuga tavern in the second film, to the professionally redeemed but morally compromised accomplice of Lord Cutler Beckett in the third, the complex personage of Norrington allows the man who portrays him in all his myriad facets—Jack Davenport—to give full range to his considerable thespian talents. Davenport came into the world with as fine a pedigree an actor can have as the son of noted actress Maria Aitken and the great Nigel Davenpot, who starred with Anthony Quinn and James Coburn in Alexander Mackendrick's A High Wind in Jamaica, perhaps the last really fine pirate movie before the genre hit the skids. That thought was very much on Davenport's mind when he first met with Gore Verbinski about playing the role of Norrington. "My first reaction when I read the script of the first movie was echoed by something that Gore initially said to me: when was the last time I saw a decent pirate movie? I was intrigued by that as well as who else was in the cast. It seemed incredible to me that such a high genre piece was being made, and on such a huge scale." Davenport was also intrigued by the layers of Norrington's character as written by Ted Elliott and Terry Rossio in their draft of the script. "I liked that he wasn't a too-oft seen English villain. I didn't have to spend the entire film standing in the prow of a boat snarling about pirates getting away. Norrington is basically the scourge of piracy in the eastern Caribbean at the start. If you're a pirate and you see me coming, you'd be scared. I suppose that Norrington's job is to bring light where there is dark, and air freshener to where pirates have recently vacated. Norrington's feelings toward pirates is that they're basically scum. They dress badly, they rob, they chat, they have very poor personal hygiene. Like any upstanding member of the British military in the eighteenth century, Norrington frowns on that kind of unethical behavior and looks forward to pounding more colonials into the dust with his larger weaponry." 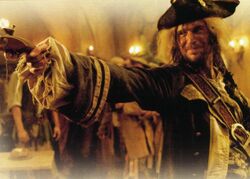 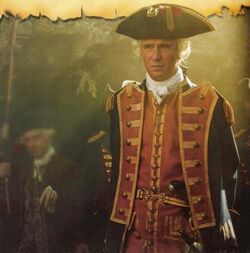 "When the second film begins," Davenport continues, "Norrington has lost big time on all fronts. He lost his girl, lost criminals from the jail—he was humiliated in every way. But hopefully you got a sense of him making mature decisions at a difficult time. The thing that always interested me about the role is that you have this character who is a leader of men in a very public role. And at the end of the first movie, Norrington is in a situation in which, in a very public arena, he's had to deal with things that are incredibly private." On a sweltering Dominica day, Davenport admitted that he wasn't quite expecting to reprise his role in the second and third films. "To be perfectly honest, I didn't think I stood a prayer of coming back, in the sense that you have to consider how your character serves the story, and one could argue that Norrington totally served his function in a narrative sense because he's kind of the secondary bad guy in the first film. It would be feasible to move the story on and leave Norrington behind, but thankfully, they didn't do that. So here I am, sweating like a pig." "To be honest with you," says Jerry Bruckheimer, "Jack Davenport is such a superb actor that we wanted him to be back with the party because he's fun to work with and created a memorable character. He really embellishes the movie, so he became an even more major player in both Dead Man's Chest and At World's End." At the Pirates workplace, Davenport's veddy British humor—drier than a gin and tonic in a West End pub—was an unending source of amusement for his colleagues, particularly the other stars. "If you can think of the set as a playground," says Keira Knightley, "and you've got the person who can transcend all the different cliques and make everybody laugh, it's Jack Davenport. He is one of the funniest men I have ever met in my entire life. He will always bring a smile to everybody's face, it doesn't matter what's going on, how hard the day is—if you go to see Jack, you'll brighten up. Jack is a fantastic actor and a joy to be around."

What do you think of Norrington, or as he became known to Jack's crew, the former Commodore? Comment below!