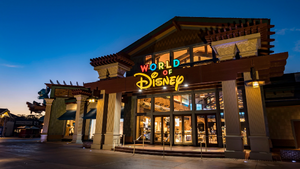 World of Disney is a group stores owned and operated by Walt Disney Parks and Resorts.

World of Disney carries an extensive line of products. Along with toys, games, and clothes, the stores also carry home appliances and artwork. The New York store also carries specialized merchandise with a New York theme found only in that store.

The New York store also the Pirate Birthday Adventure. Designed for between 10 and 15 guests, the party includes games, a cake, and themed party favors. At the end, there's a Pirate Initiation Celebration featuring Jack Sparrow. The New York store also hosted the Pirates in the Big Apple Event on July 6, 2006. The event included a viewing of Pirates of the Caribbean: Dead Man's Chest, limited edition merchandise, and a chance to speak with Jason Surrell and Mark McCreery.

The Florida store features the Adventure Room, which is decorated with a pirate theme. It's also home to Rusty Blade, an Audio-Animatronic pirate, and his parrot, Pollyanna.

World of Disney on Wikipedia